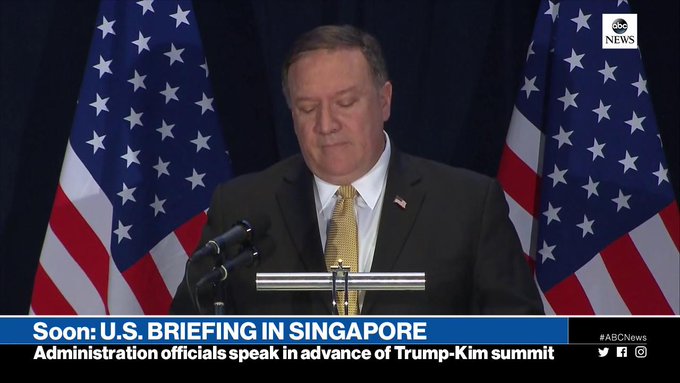 “The complete, verifiable and irreversible denuclearization of the Korea peninsula is the only outcome that the United States will accept,” Sec. of State Mike Pompeo says ahead of tomorrow’s Trump-Kim summit. https://abcn.ws/2LCsdt1

“North Korea has previously confirmed to us its willingness to denuclearize, and we are eager to see if those worlds prove sincere,” Pompeo said. “The fact that our two leaders are sitting down face-to-face is a sign of the enormous potential to accomplish something that will immensely benefit both of our peoples and the entire world.”
“President Trump believes that Kim Jong-un has an unprecedented opportunity to change the trajectory of our relationship and bring peace and prosperity to his country,” added the secretary of state. “We are hopeful this summit will have set the conditions for future productive talks. In light of how many flimsy agreements the United States has made in previous years, this president will ensure no potential agreement will fail to adequality address the North Korean threat.”
“The ultimate objective we seek with diplomacy with North Korea has not changed. The complete, verifiable, and irreversible denuclearization of the Korea peninsula is the only outcome that the United States will accept.”
Pompeo was briefing reporters in Singapore ahead of President Donald Trump’s summit Tuesday with North Korean leader Kim Jong-un.
Pompeo has not said if Trump would consider withdrawing nearly 28,000 U.S. troops from the Korean Peninsula. Defense Secretary Jim Mattis told reporters this month that the troops, most stationed on the border between the two Koreas, are “not going anywhere,” adding, “It’s not even a subject of the discussions.”
Pompeo says U.S. sanctions on the North will remain in place until the North denuclearizes, but he has warned that if diplomacy fails to move in the right direction, the sanctions “will increase.”
The secretary of state, who has met twice with Kim, said he was “convinced” the North Korean dictator shared U.S. goals:

Photos show Sec. of State Mike Pompeo arriving in Pyongyang and being greeted by North Korean officials at start of his second trip to the isolated nation. https://abcn.ws/2rB4PUu  pic.twitter.com/Ic8meSjflT 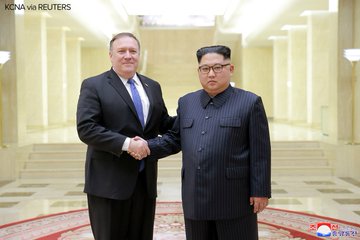 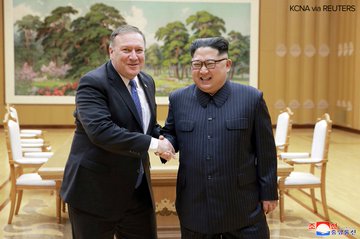 “We will have to provide security assurances, to be sure,” Pompeo said on Fox News Sunday. “This has been the trade-off that has been pending for 25 years. No president has ever put America in a position where the North Korean leadership thought that this was truly possible.”
“Our eyes are wide open with respect to the risks, but it is our fervent hope that chairman Kim wants to make a strategic change,” he said.
If Kim makes such a change, he said, “President Trump is prepared to assure that there’s going to be a successful transition.”
Trump said on the eve of his historic summit with Kim Jong-un that he thinks “things can work out very nicely” with North Korea.
Trump expressed optimism about Tuesday’s meeting during a working lunch with Singapore’s Prime Minister Lee Hsien Loong and aides to both leaders.
Trump said, “We’ve got a very interesting meeting, in particular, tomorrow, and I think things can work out very nicely.” He also told Lee the decision to hold the summit in the island city-state of Singapore was “made very consciously” and offered thanks.
The Associated Press contributed to this report.
http://email.mail.breitbart.com/c/eJxVkctuwyAQRb_G3mGBHxgvvGgUedX2FyIM4waFhwXjWunXF0dJpUpokM4dZq4uehQDHZqhNGNNmaCcsZq1dccqVnXn9lR3nHE2sW6qh6KlThpbzREMzjJipYIrryM0jV606JiWeuk5F2LpJRsEZzBr2i2lG5u-pWIQpR2viGvRvBX1lM–7_-nZeYlmuClJQnUFg3eMzus5YvyXBjLZQ1uhUB2GX0iPkS8kluIIImJEb4hJjNbIBr8pizIaH4eQ0nw9k6kUrCiPBrChnkpHGaaaUN3SWGLCorm7GFPFhAhFjU_FAfabC4rcGTwhFk-kM7k_kQqeASPmVrjb-lFpVul-fIZv2Iu4-iUTCi_vKwp7XO61swQQ2WwxPHxE7n1889IhqfT5SM_gXh5Nwl_AXsOkS4